Paste Magazine sheds light on the new Disney Millennium Falcon Star Wars ride. Ever since the recent Star Wars:The Force Awakens movie came out back in December of 2015, everyone has been going crazy over anything about Star Wars. With the new attraction centered around this craze, we expect the excitement to continue for quite some time.

As if we weren’t excited enough about Disney’s plans to build not one but two Star Wars-centric theme parks for the influential franchise, we now have details about what is sure to be one of its biggest attractions: The Millennium Falcon.

Back during last year’s D23 Expo, Disney shared concept art for its two 14-acre theme parks, one of which would be located at Hollywood Studios in Orlando and the other at Disneyland in Anaheim. According to a press release, the parks would transport “guests to a never-before-seen planet, a remote trading port and one of the last stops before wild space where Star Wars characters and their stories come to life.”

Both lands will feature signature attractions, the first of which would allow attendees to control the famous Millennium Falcon. Another throws eager fans into the midst of a climatic battle between the Resistance and First Order. 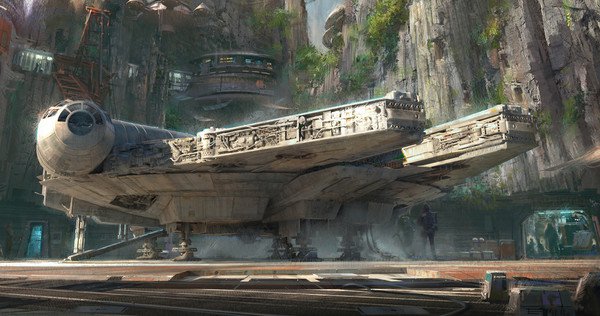 During a recent Disney Parks presentation, the company revealed just how much control we’ll get to have when manning one of the galaxy’s most memorable starships.

According to Disney Imagineer Scott Trowbridge, “You’re actually going to pilot this thing. You’re going to be the one in complete control, steering it through outer space, firing those lasers cannons…”

Conceptually it sounds amazing, though in practice it seems more than a little complicated, especially when you consider all that it’s promising. It will be interesting to see, as we get closer the complete construction of the ride, how Disney plans to execute its immersive experience. Since we’re being promised complete control, will others be on the ride with us? And what about weaponry? Will we have our own or will be able to “man” stations, so the ride functions more as a group experience? Ultimately, a simulation-based attraction seems like the most obvious option, but then again, we’re talking about Disney. We don’t put anything physically past them. 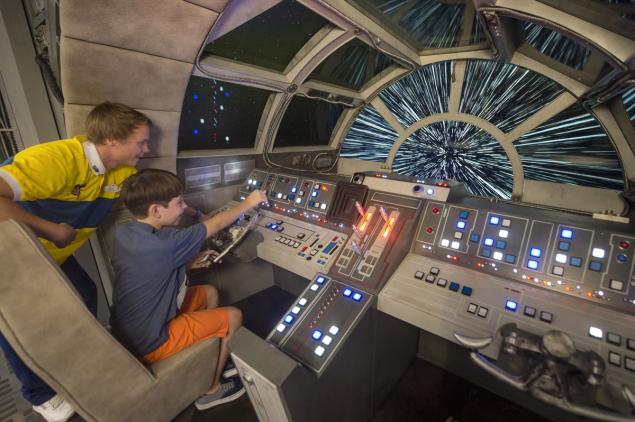 Beyond what the Falcon can offer, attendees can expect to visit an outer-worldly street market run a cast of familiar Star Wars characters, including aliens and droids. Meanwhile, at The Cantina you’ll have the chance to “sample the daily specials, interact with the locals and hear the latest rumors from the far reaches of the galaxy.”

You can see new concept art and footage for Disney’s grand and galactic theme parks, in addition to hearing more specifics about the Millenium Falcon ride, in the clip below. There is still no completion date for either the Anaheim or Orlando theme parks.