Inside the Magic Motivates you to “Move It, Shake It, Dance & Play It” at the Zootopia Street Party taking place at Walt Disney World’s Magic Kingdom Now!

Zootopia characters Nick Wilde and Judy Hopps made their first ever appearance at the Magic Kingdom on Saturday in the “Move It, Shake It, Dance & Play It” street party. Nick and Judy put on quite the show dancing and jamming with their audience but don’t ever really stop long enough for you to snap a pic with them. So far this is the only way at Walt Disney World to see the popular Zootopia characters.

“Move It, Shake It, Dance & Play It” street party is performed multiple times each day.

via inside the magic 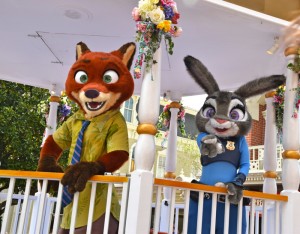 Put your dancing shoes on and slide on down….

Zootopia!!! ✨ Share this video with the hashtag #JamieZoo for a chance to win a painting ??? https://t.co/qVJLnmxtSF pic.twitter.com/kviSVlfDQX