I came to Disney World 9 months after it opened and my forever favorite ride will be 10,000 Under the Sea.

Walt Disney World is home to some of the most advanced technology of any theme park in the world. The Most Magical Place on Earth earns its name not only through this technology but through the experiences and the nostalgia that keep people coming back for more.

If you’ve been a Disney fan for a while, you’ve likely seen some of your favorite rides come and go. Today, we’re going to take a look back at some of the most popular Disney Dark Rides that are now, unfortunately, extinct. Some fans even still lament their absence. Luckily, there are still some remnants of these rides that can be found if you know where to look. Let’s pay homage as we review the top extinct dark rides that once delighted Disney World fans for years.

Maelstrom, Norwegian for “a powerful whirlpool in a sea or river”, was also the name of a ride in the Norway Pavilion of Epcot’sWorld Showcase. It opened on July 5th, 1988 and was a log chute ride with a film and audio-animatronic characters including mythical trolls.

As the ride began, the narrator said, “Those who seek the spirit of Norway will find adventure and peril.” Guests passed by the Germanic God, Odin, then viewed scenes of Norway’s Viking days. The next scene featured the audio-animatronic trolls who casted a spell on the riders. The boat then sped backwards through history then into present day to go forward again. When the boat righted, guests plummeted down a 28-foot flume toward the North Sea, an oil rig, and a small village community. As guests exited the ride, they had the option of viewing a six-minute film titled “The Spirit of Norway” depicting recreational activities including skiing, hiking, and mountain climbing on the Kjerag Mountain. 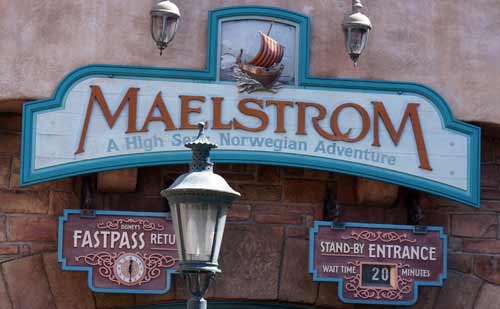 Maelstrom is now closed, and Frozen Ever After has taken over.

The ride closed on October 5th, 2014 after much criticism suggesting that the depiction of Norway was outdated and offensive to Norwegians. The Norway Pavilion is set to host a new attraction in the same area that will highlight Disney’s hit film Frozen, which will open in 2016.

Dark rides are usually slow and peaceful, but this popular ride, which appeared in Magic Kingdom on opening day, was anything but. In fact, it had sudden turns and moved rapidly toward obstacles, which would move out of the way at the last minute, and other ride vehicles.

This ride was much like the one in Disneyland, but the main difference was that the Disney World attraction featured two separate boarding areas, which would give riders a different experience depending on which area they boarded in.

The right track showed scenes of a library, Toad Hall, a barnyard complete with sheep, a pig, and a cow, a tunnel, and danger signs. The signs and a police officer warned guests to stop and turn around, but the ride vehicle continued through the plaza, a courtroom, weasel-filled jail cells, a railroad crossing, a collision, then the Hell scene before returning to the boarding area.

The left track began with three scenes not on the right track including a trophy room, a kitchen, and a gypsy camp. Guests would then see the one-way street signs, the plaza, Winky’s Tavern, a nighttime country side, Ratty’s house, and the railroad crossing where they would also experience a collision with the train. The Hell scene was a mirror image of the right track, and guests then returned to the boarding area.

The attraction was closed on September 7th, 1998 and replaced with The Many Adventures of Winnie the Pooh. Though Pooh is also a popular attraction, many guests miss the turbulent ride of Mr. Toad.

20,000 Leagues Under the Sea was a very popular opening day attraction in Disney World’s Magic Kingdom, and it ran until 1994 when it closed “temporarily.”

The submarines used for this attraction weren’t actually submarines at all but boats in which riders sat below water level. They were created in Clearwater, FL and, when delivered to Disney World, weighed about 40 tons. They were then loaded onto a concrete guide track with a special mechanism to limit collisions with other subs. Each of the 12 ride vehicles could sit up to 40 guests. Unfortunately, the ride was expensive to maintain, and the low hourly capacity couldn’t make up for its own expense. 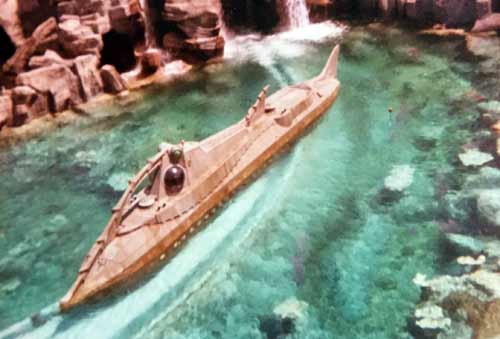 20,000 Leagues Under the Sea was a fan favorite for its peaceful beginning, exciting climax, and unique design.

The ride began in a peaceful lagoon, then the subs would “dive” deeper and deeper throughout the ride, an effect that was created by bubble machines buried in the water. Throughout the attraction, guests could see eels, sea bass, turtles, clams, lobsters and an array of other tropical fish. Upon entering the show pavilion, the boats would pass by shipwrecks, circumnavigate the Polar Ice Cap then pass by Atlantis complete with mermaids and a sea serpent. The highlight of the attraction came at the end when guests could see a giant squid attacking another Nautilus ship then experienced their own attack. As the ship returned to the surface and the safety of the lagoon, peace returned.

Although the attraction was said to close only temporarily, it was officially closed in 1996. The vehicles were moved backstage, and nine of them were buried in a landfill in 2004. Two ships were sunk in Castaway Cay for the enjoyment of snorkelers and the third appeared in Hollywood Studios’ Backlot tour until it was closed in September 2014. The two in Castaway Cay have since disappeared probably from turbulent hurricanes in the area. The lagoon was kept as Ariel’s Grotto until 2004 when it was destroyed to make room for the new Fantasyland and the Seven Dwarfs Mine Train attraction.

The now closed Snow White’s Scary Adventures was a long-lived and long-loved dark ride attraction at Disney World’s Magic Kingdom. Other installations include Disneyland, Tokyo Disneyland, and Disneyland Paris – all of which are still open.

This quintessential dark ride was the best representation of Walt’s vision for Disney Dark Rides. Since all future dark rides were modeled after this one, it ranks number one on our list of extinct dark rides. When it closed on May 31st, 2012, it was one of the few opening day attractions still operating.

Based on Walt Disney’s 1937 film, Snow White, the ride was designed so that riders were the main character: Snow White. Unfortunately, many guests didn’t understand this, and they wondered why Snow White never appeared in the ride. 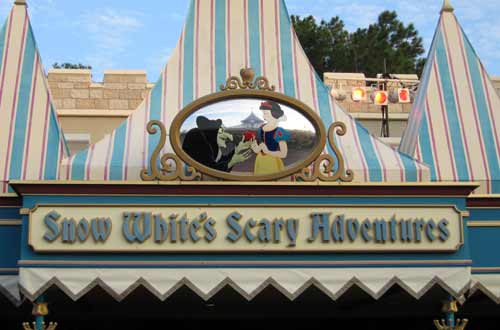 Snow White’s Scary Adventures certainly was scary, but the ride received makeovers throughout the years to make it more appealing and advance the technology of the ride.

There were several versions of this ride, but the earliest version was quite scary. The Witch appeared several times in the ride, and some guests tried and succeeded to steal the apple she presented. The 1994 version removed some of the scariest elements with a less threatening version. It also removed the perpetually absent apple with a virtual version that couldn’t be stolen.

In 2012, Disney announced the expansion of Fantasyland, and Snow White’s Scary Adventures closed to make way for the Seven Dwarfs Mine Train ride. Some of the animatronics including Doc, Sleepy, Happy, Bashful, Grumpy, the vultures, Snow White, and one of the Witches were recycled and used in the new rollercoaster attraction. The new ride is one of the most popular attractions and hard-to-get FastPasses in all of Disney World.