The three original houses include “Tomb of the Ancients“, “Lunatics Playground 3D – You Won’t Stand a Chance,” and “Ghost Town – The Curse of Lightning Gulch”. 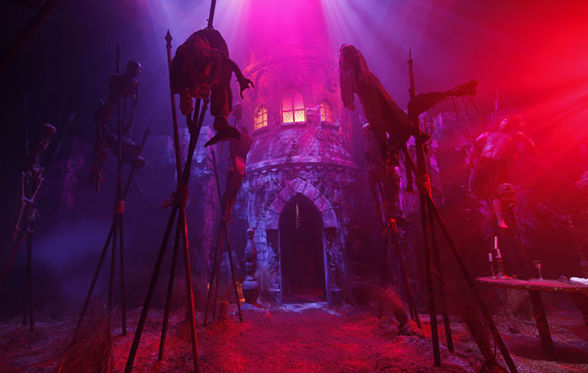 Tomb of the Ancients

An ancient evil has surfaced, and immortal beings from the past have returned to rule mankind. It was only a matter of time until “The Ancient Ones” were unearthed. Now these makers of chaos are loose from the pits of hell — and the whole world will pay.

While Jack’s away, Chance has unleashed the horrors of her imagination. Her twisted delusions and reality are continuously blurred in a 3D playground of carnage. When the music box plays, the world shifts to her sinister theater of the mind. But when the alarm starts ringing, Chance is thrown back into the brutal reality of her incarnation.

When lightning strikes, the curse of Lightning Gulch comes to life and this ghostly town appears. These doomed souls — who once went searching for gold — found death and destruction. And now they seek others to join them. As thunder cracks, flashes of lightning will lead your way through the treacherous wild west nightmare.

Five original scare zones have also been announced: “Survive or Die,” “Banshee’s Lair,” “Dead Man’s Wharf,” “Vamp 1955,” and “A Chance in Hell.” Read the descriptions below.