Behind the Thrills shares a taste of the treats!

Chocolate. Milkshakes. More sweets than you cam imagine! That’s enough for most to head to Universal Orlando’s newest CityWalk restaurant, Toothsome Chocolate Emporium and Savory Feast Kitchen. While that may be enough, it’s only the beginning.

Universal has spent the better part of the past three years reinventing their CityWalk restaurant line up. From bringing in original restaurant ideas, to unique chains. Toothsome Chocolate Emporium seems to be a culmination of everything Universal has done over the past few years. Over the past few weeks, the all-new restaurant has been having soft openings (or technical rehearsals). We just happened to be lucky enough to get a table.

Located in the former home of NBA City, Toothsome looms over CityWalk with huge smoke stacks, reminiscent of a Chocolate Factory. While it’s easy to make the connection, a chocolate factory implies that it only makes the chocolate. Not only are chocolate confections created here, but there’s also more at work than just chocolate.  For starters, there’s a massive gift shop. While most restaurant gift shops sell souvenirs and trinkets, Universal dives full into their steampunk theme by offering edible pieces of art. Pocket watches and gears make for unique treats, while guests can get chocolate and macaroons to go from a candy case.

If you want to skip dinner and go straight to dessert, guests can walk up to the ice cream counter and order a sundae, or one of the massive signature shakes. While the shakes are delectable, they aren’t your typical burger joint shakes. Some of the shakes go more for substance than thickness, while others go for flair. I tried the Red Velvet shake, which mixes rich ice cream with an entire red velvet cupcake. It doesn’t even begin to stop there, as the shake is then topped with another red velvet cupcake, and the straw is shoved through it. It’s huge, it’s rich and it is about the best milkshake I’ve ever had. 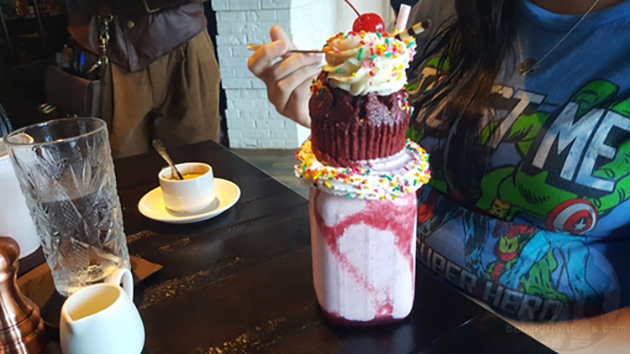 The menu is full of shakes just like that, with a lot of emphasis on the extras. There’s everything from salted caramel pretzel to chocolate banana (which uses a whole chocolate dipped banana) in the shake line up.

Shakes aren’t the only dessert on the menu, with the lineup including huge sundaes, cakes and other delights as well. However, the true surprise comes in the entrees at Toothsome. There are a ton of them! The menu has everything on it from burgers and fries, to a mouthwatering chicken dish, and even an unbelievable steak. Chocolate is also present in a lot of the dishes, serving as the base for many of the appetizers, drinks, and yes there is chocolate beer! If you want a vegan alternative, there’s that as well.

The menu choices literally offer a little of something for just about everyone, and gives a great range of flavors for every palette. Universal doesn’t forget about the local shops either, as they use as much locally grown and made products as they can. Much of the chocolate is from a shop in nearby Winter Haven, and the chocolate beer is made specifically for Universal by a Melbourne based brewery. 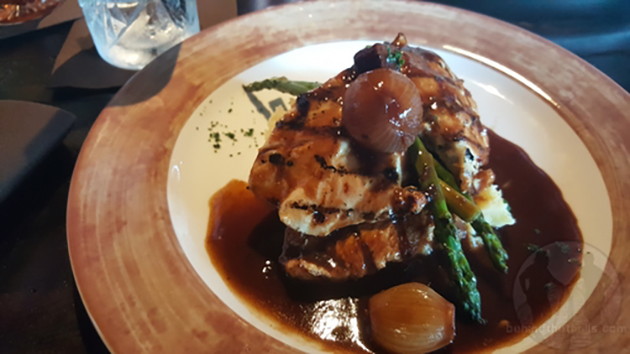 Of course one of the real keys to the success and the overall love for the new restaurant is the atmosphere. The restaurant has a very distinct, 19th-century Steampunk vibe. All the staff don hats and goggles, while dresses and suits are the norm for many others. There are gears churning all over the restaurant, with large screens simulating the largest of gears. They even have a backstory that involves Penelope Toothsome, her robot sidekick, time travel and, of course, chocolate.

In fact, Penelope wanders around the restaurant chatting with guests and talking about her travels. Penelope isn’t the only amazing cast, as the restaurant is full of them. Servers seem to be on top of their game, and make the guest feel like they are in for fine dining, even if they are wearing theme park attire.

Universal Orlando has announced that Toothsome will be making their grand opening debut at 4 p.m. on Sept. 22. The next day, Toothsome will go to its regular schedule of 11a.m. to 11 p.m. which means, yes, they are open for lunch!

via Behind the Thrills