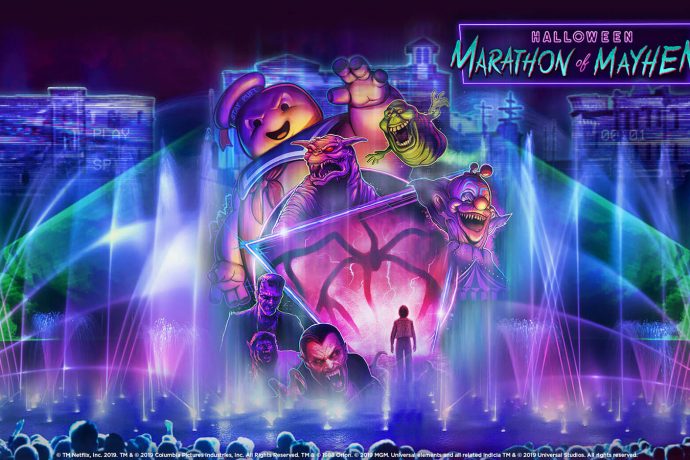 This show will perform on select nights from Sept. 6 – Nov. 2. The lagoon at Universal Studios Florida will transform with a spectacle of neon and synthesizers and showcase iconic scenes from all your favorite horror films, cult classics and TV shows.

Show times each event night are 10PM, 11PM and 12AM. Download the Official Universal Orlando Resort Mobile App for updates and more info. Speaking of the app…TERROR TRIVIA is back!

“Halloween Marathon of Mayhem” will feature scenes from Netflix’s “Stranger Things,” “Ghostbusters,” Universal Monsters and “Killer Klowns from Outer Space.” The show will use a blend of fountain-based media, state-of-the-art technology and special effects to make one spooky spectacular come to life. Showtimes for each event night will be at 10 p.m., 11 p.m. and 12 a.m.

Also announced was the return of Terror Trivia to the official Universal Orlando app! Fans can test their knowledge with 11 horror-packed levels, featuring questions about this year’s haunted houses and the history of Halloween Horror Nights. Achievements can be unlocked along the way, as well as a few “hidden gems” to discover. You can download the official Universal Orlando app now on the iOS App Store and Google Play.