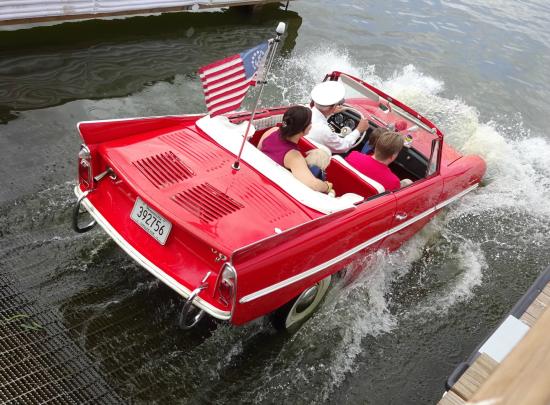 The Model 770 denoting a top water speed of seven knots and a top land speed of 70 MPH, that speed is actually where the Amphicar’s official name, comes from. These cars were produced in Germany between 1961 and 1968, with about 3,000 making their way to U.S. waterways and driveways. It is estimated that fewer than 600 seaworthy examples still exist. Power comes from a rear-mounted Triumph 1,147-cc inline-four that motivates the Amphicar on land through the rear wheels and on water via twin propellers mounted just behind the rear axles. Just like on terra firma, the front tires steer the Amphicar out on the water by acting as rudders.

The leisurely cruise starts near the The Boathouse restaurant’s main entrance on a fenced-off turntable. Just like on a rollercoaster, there is some safety talk while an employee engages the secondary door latches to help prevent any accidental opening of the doors. Heading down the boat ramp, there’s a brief pause while the captain engages the Amphicar’s propellers by pulling a lever positioned next to the gear shifter, and then the fun starts! The initial splash into the lake is perhaps the best part of the ridealong as water almost crests the windshield, but the rest of the cruise gives a unique perspective of Disney Springs that most guests won’t get to see. 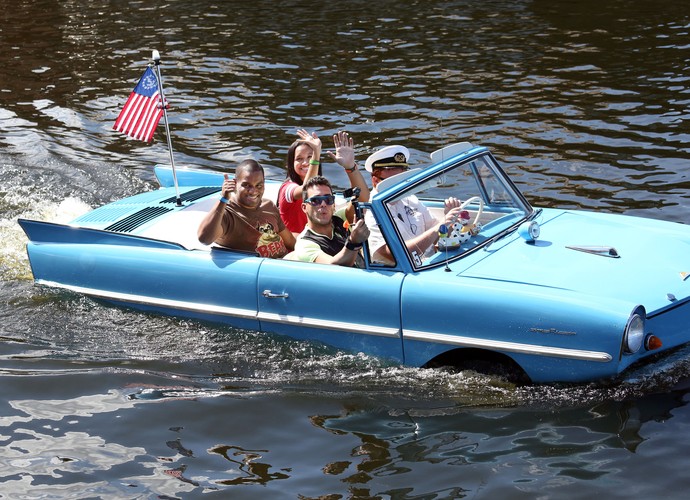 There’s no other ride or rollercoaster anywhere else in Orlando that leaves the rider feeling like as much of a rock star as when the cars are greeted by a camera-wielding crowd of onlookers.

Disney, as a whole, is a magical place, and the Amphicar rides at The Boathouse are just further proof of this as riders and spectators of all ages are sure to get a kick out of experiencing or just watching these cars out on the water.