Theme Park Tourist discloses that in 2010, The Wizarding World of Harry Potter arrived in Orlando, Florida. The theme park that hosted it, Islands of Adventure at Universal Orlando Resort, claimed a paltry 4.3 million visitors in 2009. In 2015, that total had almost doubled to 8.8 million. All the credit goes to the Harry Potter license, which is why Universal execs doubled down on the premise in the years that followed, adding a second Potter themed land to Universal Orlando Resort, this one located at Universal Studios Florida.

In order to maintain the illusion that park guests live in J.K. Rowling’s fictional magical realm, Universal did something unique. They constructed the train described in loving detail in Rowling’s novels using the Harry Potter film franchise’s representation as the blueprint. By this point, you’ve probably handed over your boarding pass, walked the grounds of Platform 9¾, and taken a ride on the best train that wizards can ensorcell.  That makes today the perfect time to go Behind the Ride to discover the four tricks that allow the Hogwarts Express to feel so authentic.

SPOILER WARNING: If you’d prefer not to know anything about the experience or plotline of the Hogwarts Express before riding it, stop reading now.

The Experience: Bringing the fictional into existence

The Trick: making sure the trains run on time 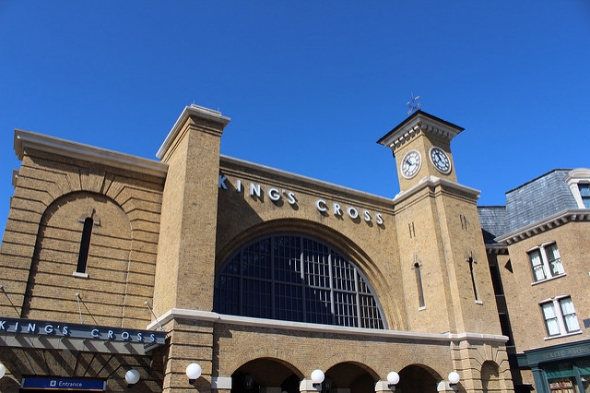 The power of Rowling’s words is such that filmmakers working on the Harry Potter franchise noted that they rarely struggled with the special effects. The storyboarding process felt easy since her words figuratively jumped off the page, offering a vivid description easily recreated via illustrations. From there, set designers and computer animators had little difficulty in bringing a fictional train to “reality,” presuming that what’s seen on film is “real.”

Universal Studios constructors faced a more difficult challenge. Even though they had visual documentation of the Hogwarts Express, bringing it to life required a diverse set of requirements. The look of the trains had to match those from the film identically. Fans of Harry Potter – and I’m so much of one that I have first editions going all the way back to Harry Potter and the Chamber of Secrets – are pedants where wizardry is concerned. They won’t settle for “almost” or “good enough” when it comes to The Wizarding World of Harry Potter.

Building a model train isn’t difficult. People do it all the time. Even a full-scale version isn’t hard if someone has the resources to pay for all the parts. If the train needs to RUN, that’s a different level of complexity altogether. If it has to operate in a fixed parcel of land that can’t change much and the train has to maintain the illusion of a fictional realm throughout the journey, that’s…well, it’s clearly not an impossibility, but the level of difficulty is off the charts.

To the credit of everyone at Universal Studios, the Hogwarts Express manages all of this. It’s a functional set of train tracks with two depot destinations: Hogsmeade Station and King’s Cross Station. To achieve this, the trains themselves are cable cars rather than true trains. Universal devised an elevated track system that could pull the vehicles down the path from their starting point to their destination. Notably, the cable cars can only go one way. They even face the same way. The illusion of a magical train doesn’t require the complexity of a complete train system. Instead, Universal could pull off the same effect with a much “dumber” type of vehicle. Rapid transit transports like this are the easiest form of transportation network. Unlike magic, science is easy!

The system was built by funicular railways specialist Doppelmayr, who boast: “Hiding behind the detailed reproduction of the renowned steam train is a modern funicular ropeway constructed by the world market leader in ropeway engineering.” 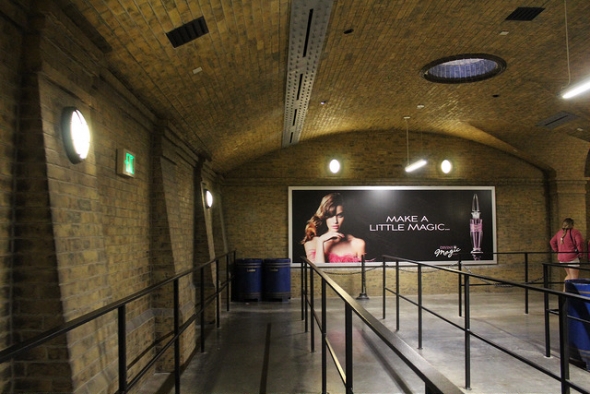 Universal Studios park planners faced a seemingly impossible scenario with the Hogswarts Express. Every aspect of the trains as well as the ride experience must replicate the feel of a Hogswarts student riding to school for the first time or heading to the shopping district of London’s magic realm. Anyone looking out the window had to feel that sensation of the Hogwarts Express swooshing them away to their destination.

Alas, those same park planners had to lay the tracks on a parcel of earth that looked nothing like Great Britain. This Florida landscape was decidedly not magical, either. Once park guests boarded the train, however, they had to buy into the myth of a departure from the land of Muggles into the mystical realm. You know what would have killed that illusion instantly? Windows. Looking outside at the unused backlot of Universal Orlando Resort would end the fantasy before it had a chance to start.

Thankfully, technology presented an easy fix for this problem. Some clever Muggles deduced that they could pretend to be wizards if they simply altered the view. Forget for a moment that you know that the elevated train tracks reside in Florida. Think about what you remember about the journey of Hogswarts Express rather than what you know of it. 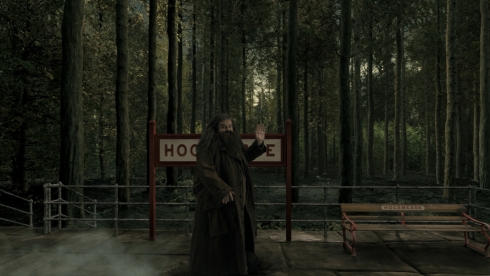 As you journey from Hogsmeade Station to King’s Cross, you wave to Hagrid and then watch Buckbeak fly by the train. You enjoy Centaurs playing Centaur games, and you see the Weasley twins, one of whom is apparently resurrected, provide fireworks (literally). Then, the mood turns as Malfoy Manor approaches. The weather symbolically matches the malevolence of the magical mansion. Before you grow too scared, friends appear to comfort you. Then, you watch the Knight Bus whizz through a comical series of impossible turns thanks to its supernatural steering. Finally, you approach the station where your ally, Alastor Moody (presumably the nice one, not Barty Crouch Jr.), welcomes you to your destination.

The travels from King’s Cross to Hogsmeade are different, a pleasantly surprising fact to most first-time riders. On this trip, the bird you see is Hedwig the Owl. The danger you face involves Dementors, the scariest of all monsters from the Potterverse. You do see Malfoy Manor once again because, well, it’s on the way. And the weather again changes to signify the darkness of their nature. Soon afterward, comic relief lightens the mood when Arthur Weasley’s car, the Flying Ford Anglia, crashes chaotically. You also watch Hagrid zoom by in his motorbike, giving him just enough time to meet you at the station. 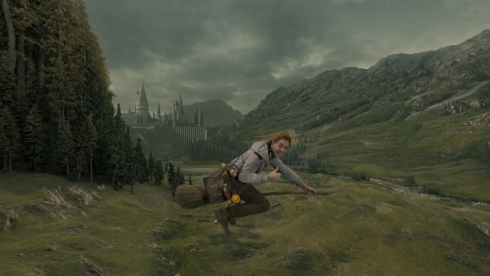 Both trips from Hogsmeade Station to King’s Cross are memorable and exciting. The trick is that neither of them actually happens. Instead, clever ride designers wall off the dull view of the Florida land. What they provide instead is the equivalent of a Harry Potter short film as a distraction during the five-minute journey across boring terrain. The “wall” of the train is a curved monitor that exhibits a 3D film. You don’t need to wear glasses since the curvature and underlying tech build the effects differently than a Hollywood movie. It’s actually similar to the Nintendo 3DS in that the three dimensions are easily visible without need for additional hardware. One of the most amazing effects on Hogswart Express is also the easiest. You’re just watching giant TVs!

The Experience: Seeing and Hearing Your Favorite Harry Potter Characters 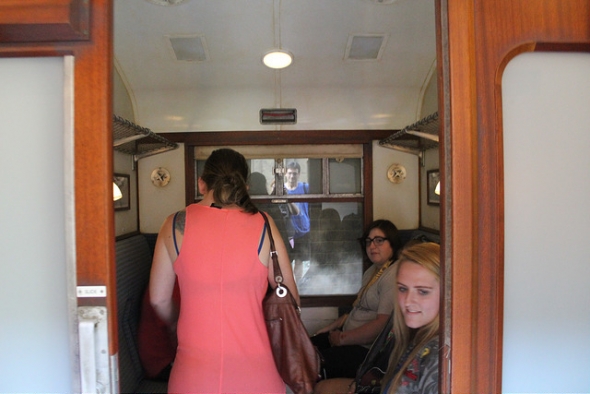 When the door opens and you enter the eight-person train compartment, you walk by a masterful piece of technology. Amazingly, you don’t even notice it. The doors that open and shut in unremarkable fashion are in no way ordinary. They’re extremely expensive projection monitors hidden in plain sight. You’ve possibly noticed that the Universal Studios employees don’t want you touching the doors. That’s why. They carefully slide the expensive pieces into piece while you’re distracted by the wall projections. It’s a clever misdirect that allows for an even better trick later in the ride.

Midway through the train ride, the attention switches from the wall to the doors. That’s because the projection displays contained inside those doors reveal a wonderful surprise. The outlines and voices of popular Harry Potter characters hint that they’re onboard the Hogwarts Express with you. Potter himself joins Hermione Granger and Ron Weasley on one of their usual train misadventures. One of them eats a spider – you can easily guess who – and then they move along to their regular Horcrux-related adventures. On the other voyage, the excitement directly involves the rider. A Dementor invades the train, but the Boy Who Lived casts a Patronus spell to dispel it from just outside the ride compartment. It’s the closest a Muggle ever comes to meeting a Dementor and living.

These special effects are unique in that the colors are effectively binary. Rather than recreate the actual Potter characters, Universal uses light and shadow to tell the story. The door monitors are white while Harry, Hermione, Ron, and the Dementor are all dark shadows. When Harry casts the saving spell, the doors explode into a dizzying white to reinforce the premise that he’s ridding the cabin of darkness. Once again, Harry Potter saves the day. And for his reward, he…well,you can watch this video to find out if you don’t already know. It includes both ride experiences.

The Experience: Vanishing Passengers at Platform 9 ¾

The Trick: One of Disney’s favorites, Pepper’s Ghost! 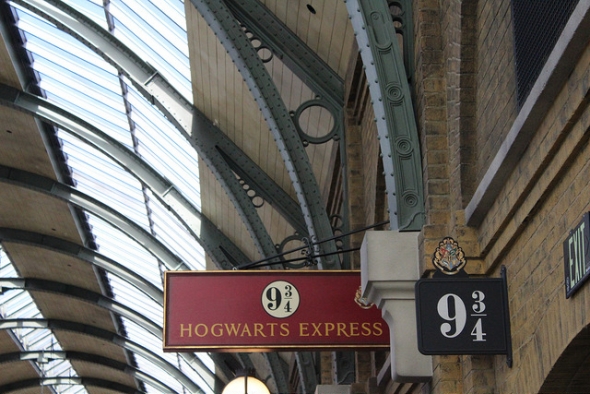 One of the signature aspects of the Hogswarts Express experience for Harry Potter is watching other passengers disappear in front of him. The trick requires a wizard to run through a brick wall, only it’s obviously not there. Wizards know this since the Platform 9 ¾ trick existed all the way back in the 1850s in the books.

Faced with the likely possibility of a huge line queue for Hogwarts Express, Universal park planners did something clever. They added a partial simulation of this premise. You don’t actually run through a wall, of course, as that would cause safety issues for all concerned. To those guests behind you in line, however, you do appear to disappear from sight. Study the 25-second mark of this video to see the trick unfold. You’ll notice that some passengers really get into it while others walk as if nothing has changed. That’s because from the perspective of the latter group, it’s true. A lot of folks walk right past this section, never realizing anything was different. It’s just an ordinary part of the line queue to them.

What Universal did here is place a couple of innocuous signs just past a flight of stairs. Those indicators are for Platforms 9 and 10. Fans of the franchise paying attention appreciate that something special is about to happen. Tired guests who have stood in line all day just see it as another segment of a long line.

Anyone watching the line in front of them will notice something strange, though. Thanks to the oldPepper’s ghost trick best known from Disney’s The Haunted Mansion, Universal can show a misleading picture. A clever glass setup reflects an image of a wall rather than the actual line queue. Through such a simple act, people walking down a normal path appear as wizards transporting through a brick wall. It’s a small touch that exemplifies what’s so magical about the Wizarding World of Harry Potter. Universal maximizes every little moment that can add an authentic touch to visiting this otherworldly realm.