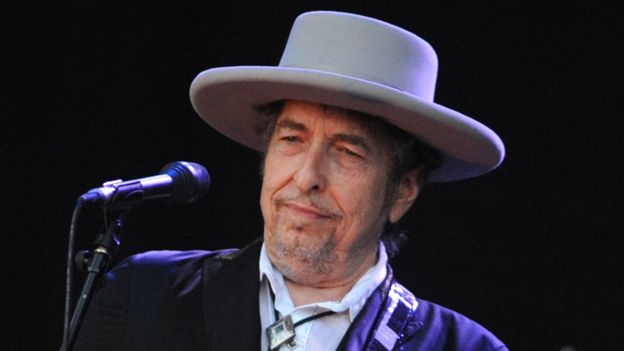 After an entire lifetime of writing prolific lyrics that reflected and predicted the sign of the times.

US singer Bob Dylan has been awarded the 2016 Nobel Prize for Literature, becoming the first songwriter to win the prestigious award.

The 75-year-old rock legend received the prize “for having created new poetic expressions within the great American song tradition”.

The balladeer, artist and actor is the first American to win since novelist Toni Morrison in 1993.

His songs include Blowin’ in the Wind and The Times They are A-Changin’.

Sara Danius, permanent secretary of the Swedish Academy, said Dylan had been chosen because he was “a great poet in the English speaking tradition”.

“For 54 years now he’s been at it reinventing himself, constantly creating a new identity,” she told reporters in Stockholm.

The singer is due to perform later at the Cosmopolitan hotel in Las Vegas. 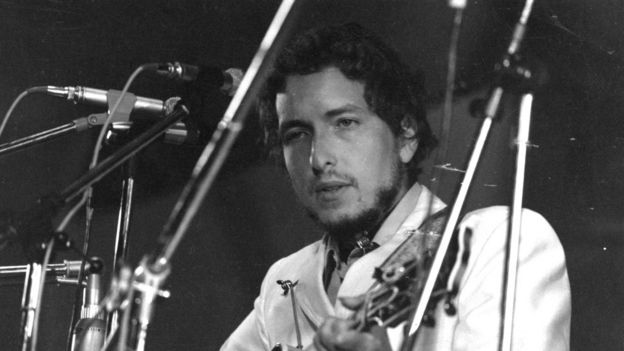 Bob Dylan – the first person to win a Nobel Prize the same day as he plays a gig in Las Vegas.

What makes a man who has only ever written three books a suitable winner of the Nobel Prize for literature?

Bob Dylan arguably made the lyrics more important than the music.

Last Friday Dylan supported The Rolling Stones at the Desert Trip Festival in California and his set included Rainy Day Women #12 & 35 from that very album.

It is a song with the refrain “everybody must get stoned,” leading to decades-long debates about whether it deals with Old Testament-style punishment or a call to smoke cannabis. Or most probably both.

Few would argue that is one of his finest lyrics, but it does demonstrate the mixture of political questioning, religious exploration and interest in humanity which has been woven through his work for more than 50 years and has secured him this award.

The result also demonstrates a real change for the prize. In 112 years, no songwriter has ever won before.

The decision elevates song lyrics to being on a critical par with literature, poetry and playwriting. It’s a big step away from the self-perpetuating intellectualism and elitism for which the award had been criticised.

Dylan was born Robert Allen Zimmerman in 1941 and began his musical career in 1959, playing in coffee houses in Minnesota.

Much of his best-known work dates from the 1960s, when he became an informal historian of America’s troubles.

Blowin’ in the Wind and The Times They are A-Changin’ were among anthems of the anti-war and civil rights movements.

His move away from traditional folk songwriting, paired with a controversial decision to “go electric” proved equally influential.

Since the late 1980s he has toured persistently, an undertaking he has dubbed the “Never-Ending Tour”.