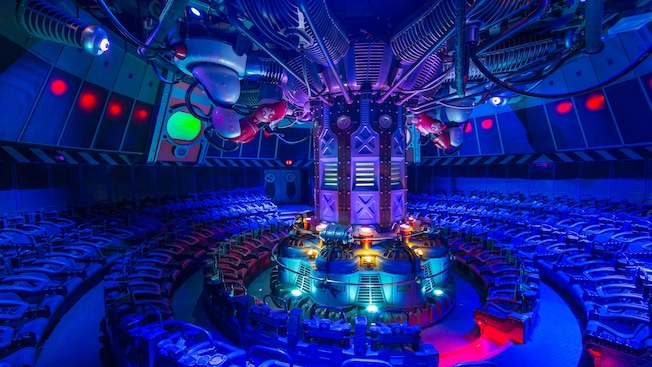 Journey to deep space for a completely chaotic, totally grossed-out adventure that will appeal to kids of all ages – Stitch’s Great Escape! A lively, 15-minute show that features great special effects, Stitch’s Great Escape includes audio-animatronic characters from Disney’s animated movie, Lilo & Stitch, which was released in 2002, such as the mischievous Stitch (originally known as Experiment 626), Captain Gantu and Agent Pleakley. The events take place prior to Stitch’s adventure in the movie, as he rampages through the Galactic Federation Prisoner Teleport Center.

Stitch’s Great Escape opened in Tomorrowland at Disney’s Magic Kingdom Park in 2004 at the former site of ExtraTERRORestrial Alien Encounter, which closed for good in 2003. The attraction usually draws long lines but FASTPASS is available. Stitch’s Great Escape is known for its state-of-the-art audio-animatronics (Stitch is actually the first audio-animatronic figure at Disney’s Magic Kingdom who can spit!).

Height Requirement: You must be at least 40 inches tall to ride Stitch’s Great Escape (some scenes may be too intense for young children).

Are you looking for SeaWorld Tickets 2 For $49 to spend time with your family or friends? Look no further! SeaWorld is offering a special two-for-one ticket offer for just $49! This is the perfect opportunity to explore the wonders of the sea while spending quality time with those you care about. With the two-for-one ticket offer, you can explore the …

END_OF_DOCUMENT_TOKEN_TO_BE_REPLACED

Unlock the fun in Orlando with $39 Universal Studios Tickets. For a limited time, you can purchase discounted tickets to the 2023 Universal Studios season in Orlando, Florida. Whether it’s your first visit or you are returning after years away, this is one ticket deal that everyone will be excited about – especially because it only costs $39 per ticket! …

END_OF_DOCUMENT_TOKEN_TO_BE_REPLACED

Are you dreaming of a magical Disney Cruise 2023 vacation the entire family can enjoy? Step aboard a Disney Cruise Line itinerary and explore why this popular choice is among the top favorites for families. There’s something for everyone to love. For a limited time, take advantage of the $500 off Cruise credit for 2023 below! What To Expect When …

END_OF_DOCUMENT_TOKEN_TO_BE_REPLACED

Are you an avid Disney World fan eager to experience the best Epcot rides in one day? Many people feel intimidated by the prospect of experiencing all the EPCOT Rides! Don’t worry – with a few odd but effective tips, you can! That way you can make sure your family has had an amazing day at this exhilarating theme park. …

END_OF_DOCUMENT_TOKEN_TO_BE_REPLACED

Above all, Walt Disney World is one of the most popular tourist destinations in the world. Families and couples flock to Orlando, Florida, every year to enjoy the theme parks, resorts, and other attractions. Disney World can be expensive! There are ways to save money on tickets. This blog post will discuss getting $59 Disney World Tickets in 2023. Experience …

END_OF_DOCUMENT_TOKEN_TO_BE_REPLACED

This Black Friday, Amazon is offering some amazing deals. For example, you can get a $79 vacation to Disney World. That’s an incredible deal! Make sure to check out the rest of Amazon’s Black Friday deals below while they’re still available. You’re sure to find something that you love! Unlock The Magic At Disney! The Magic Kingdom is the original …